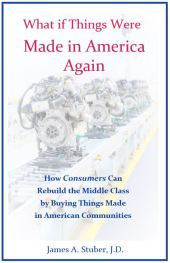 What if Things Were Made in America Again: How Consumers Can Rebuild the Middle Class by Buying Things Made in American Communities (Current Affairs Press, 2017)

By Jim Stuber’s telling, the light bulb moment that led to this book actually involved a light bulb – bearing the GE logo, and, in all caps the word CHINA.  He was off and running, seeking answers to the three questions posed in this book: Why does it seem like everything is made somewhere else?  Isn’t that causing a problem?  If it is, what can be done about it?

The answers are surprisingly hard to come by, but Stuber finds them, and they are surprising.  We learn how the U.S. gave whole industries away pursuing unilateral free trade and fighting communism.  How trade morphed into globalization, three billion people joined the world economy, creating the “age of oversupply,” and China changed everything by adopting just enough capitalism to become the “world’s workshop,” to the detriment of developed and developing countries alike.  How all this resulted in six million lost manufacturing jobs and lower wages for most Americans, outweighing any gains from lower prices of the foreign goods.  How these lost jobs destroyed lives, families, and communities, while our political and intellectual elites told us how good this was for everyone.  How the future holds more jobs lost to Mexico, China, and India, including white collar jobs, in a “race to the bottom” threatening our children’s future.  Most importantly, we learn how consumers can solve the problem, without asking anyone for permission.

What sets this book apart is its plan of action that can immediately be acted upon by individual Americans: -- bring home $500 billion in spending, create six million jobs, and get the virtuous circle going again.  It is required reading for every American.

“Your smart phone was made in a labor camp, your clothes were made in a sweatshop, and your fish were caught on a slave ship.”  So James Stuber tells us in the introduction to this timely book.    Stuber invites us to follow him on the journey to learn “what is really going on” with trade, globalization, and the U.S. and world economies.

We go to some surprising places.  To Reynosa, Mexico, and Flint, Michigan, after Delco sent its production to the former from the latter: “And so, there we have it, Stuber says, “Under NAFTA, we send Flint’s jobs to Reynosa, creating demand for drugs in Flint, demand that is filled by gangs in Reynosa.  We have “employed” workers living in shanty towns in Reynosa, and jobless workers living in slums in Flint, and drug wars going on among suppliers in Reynosa and distributors in Flint.”

To the Chinese “factory labor camp” making smart phones, with nets to prevent more workers from committing suicide by jumping off the roof.  To the Illinois steel mill, dealing with the suicide of one of its workers, because the mill was shut down when China started dumping its overproduction of steel on the U.S. market.

We are caught up in the “Big Squeeze” of the global low-price, low wage economy, with every nation, including the U.S., competing to win over transnational companies shopping the world for low wages and subsidies.  And the future looks even worse, as white-collar and professional jobs are being swept offshore along with manufacturing.

Fortunately, Stuber offers a better vision for the future, and a practical way American consumers can achieve it – and not a moment too soon, as the window of opportunity will soon close. – Current Affairs Press